2022 Marietta Grand Prix Begins In May! 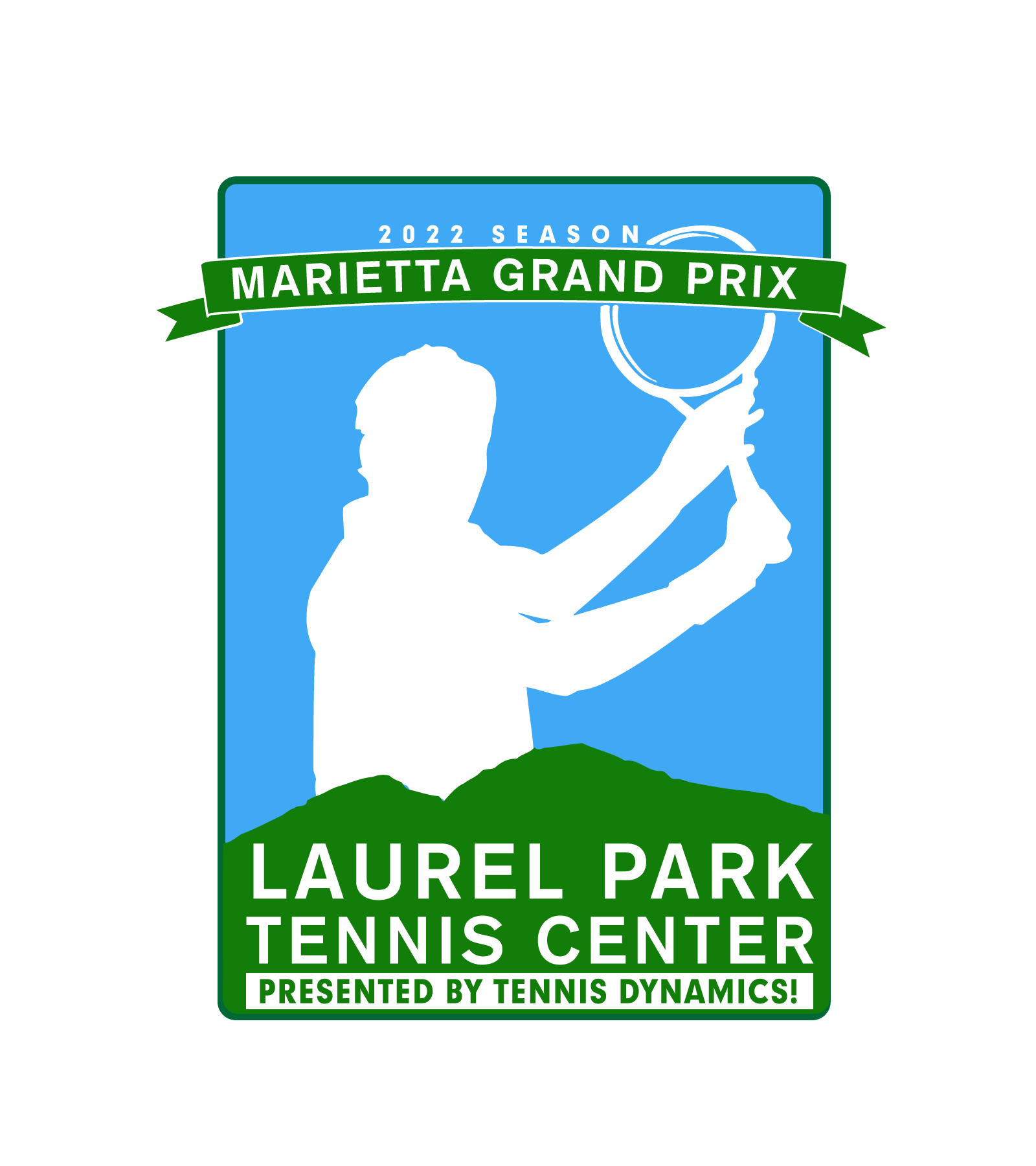 The Marietta Grand Prix for 2022 is presented by Tennis Dynamics!

Welcome back to the Laurel Park Tennis Center! We are back in May of 2022. Each event offers competition, lunch and a chance to compete and be crowned The 2022 Season Champion of your Division. Divisions for Juniors and Adults.

Boys and Girls 10’s-18’s both singles and doubles.

Here is the link to the MGP #1 Junior Divisions.

Here is the link to the MGP #1 Adult Divisions.

You do not have to be a member of the USTA in order to play this tournament!!!! Click on this FREE USTA ACCOUNT link and get a number we can use!

Gentlemans’ and Ladies’ Open Divisions for Singles and Doubles – This tournament is open to all ages!

BOTH players must report to the tournament desk within 15 minutes after completion of the match to report score.

For the Open Divisions the tournament ball is the Wilson US Open ball. For all other divisions we will use the most readily available ball, could be Babolat, Dunlop or Penn.

Refunds: Once the deadline closes there will be no refunds for the Open events. If there is inclement weather and no matches are played you will receive either a credit toward the next Marietta Grand Prix or a 75% refund.

The Open division is open to the top 6-8 players who register. We will consider “all factors” in determining the qualifying entrants and seedings. If there is a large number of entrants we will host a Qualifying Tournament on the Wednesday evening before and thru Friday. We will select 6 entrants into the main draw and 2 entrants will have to qualify for the event. The qualifying matches may be longer scoring formats than the main draw format on Saturday due to less time constraints. Prize money is awarded based on the number of entrants. Our intent is to award to the Champion, Finalist and perhaps semi-finalists in the singles. For the Doubles events the Champions of both the Gentleman’s and Ladies Doubles are awarded prize money. More info on the prize money levels is to follow in the coming days.

We most likely will not be providing officials for these events. Players are expected to adhere to “The Code”.

There are no back draws for the Open Events. It is a “One and Done!” event for both the qualifier and the main draw events.

Ad Scoring will be used in all events to assist in allowing for “benefit of doubt”.

Alternative formats will be used for both the singles and doubles on Saturday. One example of an alternative format might be playing the TB first and then the subsequent sets. We call that format “The Icebreaker” format. Scoring might even include starting a set at 2-2 in order to complete the events before the end of the day. The doubles events could be shortened even more as they will occur after the singles is completed. One possible format for the doubles will be one set to six starting at 2-All in games.

Here is the link for the MGP #1 Open $$ Divisions.

FOR NON-OPEN DOUBLES ONLY:

THE DOUBLES IS PLAYED AFTER THE SINGLES UNLESS WE HAVE SPECIFIC “DOUBLES SPECIALISTS” WHO SIGN UP TO PLAY. IF YOU SIGN UP FOR DOUBLES ONLY THE FEE IS $17.50 PER PERSON. IF YOU ARE PLAYING SINGLES AND ADDING DOUBLES THE FEE IS ONLY AN ADDITIONAL $10.00.

PLAYED AFTER THE SINGLES THE DOUBLES EVENTS ARE SINGLE ELIMINATION.

IF THERE IS ENOUGH PARTICIPATION FOR “STAND ALONE” DOUBLES EVENTS THE DRAWS WILL BE ARRANGED TO HAVE MORE THAN ONE MATCH. IF YOU WIN YOU CONTINUE ON TO PLAY THE NEXT ROUND.

YOU NEED TO CALL US AND LET US KNOW YOU WANT TO PLAY DOUBLES.

**FOR DOUBLES: If you do not have a partner we will try to find one for you.

DOUBLES IS PLAYED LATER IN THE DAY ON SATURDAY AFTER THE SINGLES DIVISIONS.

The Men’s and Women’s Open Singles and Doubles Divisions will be played for prize money.

The dates for this year’s series of (8) eight tournaments is as follows:

3:00 p.m. – Final singles matches begin to finish up and players who entered doubles to play after the singles concludes begins.

IF WE HAVE 5 OR LESS PLAYERS IN A DIVISION THERE COULD BE A ROUND ROBIN FORMAT FOR THIS TOURNAMENT. IT DOES NOT MEAN EVERYONE PLAYS EACH OTHER.

No refunds will be given once a tournament entry has been accepted and filed online.

This contest takes place at 10:30 a.m. before the Marietta Grand Prix begins. YOU MUST BE REGISTERED AT THE DESK BEFORE 10:20 AM. The winner of the contest gets the recognition and his/her name engraved permanently on the enormous silver trophy kept at the Laurel Park Tennis Center. All players need to be present at 10:20 a.m. in order to review the rules for the contest. If the players are entered into the Marietta Grand Prix then they are then they are able to compete at no charge. If rally players are not entered in the MGP then the fee is $5.00.

The first Rally Cup Challenge contest was held in 2015 and was won by a fantastic 6 year-old girl named Chloe Zigliara. Chloe managed to rally just under a 400-ball-rally with her partner. To win the Rally Cup Challenge it takes skill and discipline. Chloe defeated several older ranked players to win the first challenge. 10 kids and adults joined in the contest which lasted over 30 minutes. Each time we hold the Rally Ball Challenge we produce another fantastic rally.